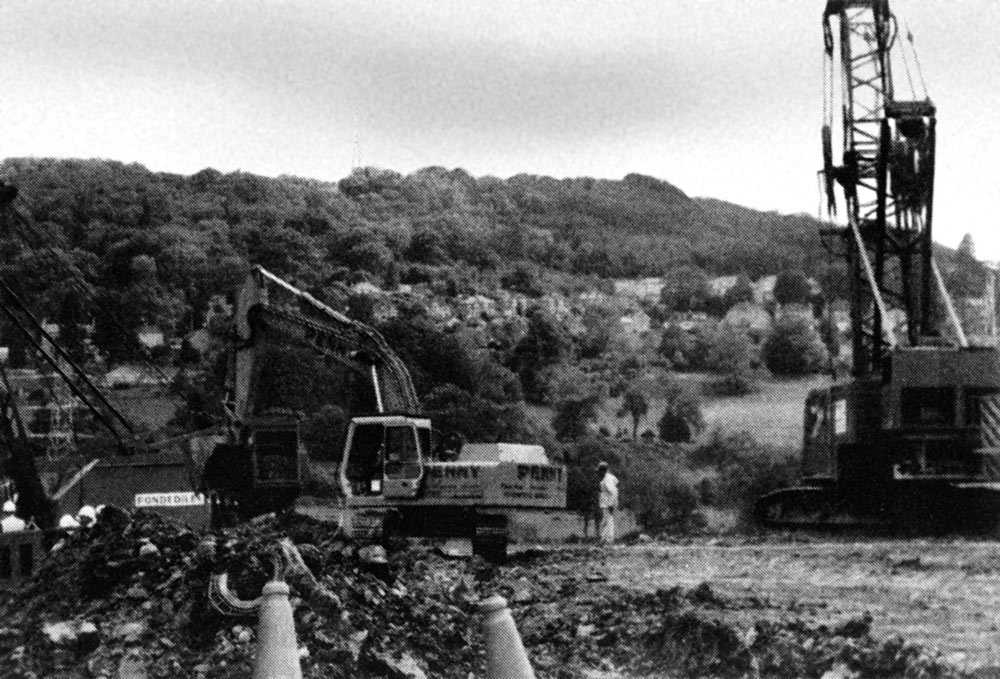 Having publicly announced a reduction in the road-building programme, the DoT have attempted to persuade the general public that it is aware of environmental issues but, when the bulldozers come to your town, who will be there to stop them?

Solsbury Hill looks set to become the Twyford Down of 1994 and, given the Government's record of lies and misinformation, who believes the DoT anyway?

Climbing up on Solsbury Hill, I could see the city lights. I could also see scars in the surrounding countryside belonging to a road scheme that has become a centre of controversy matching those at Twyford Down and the M11.

The Batheaston/Swainswick bypass has been long awaited. Road traffic is currently turning these villages into no-go areas for children. There are few people who would dispute the need to reduce the volume of traffic but the bypass has been implemented without due consideration for the local environment and with a veil of bureaucracy and misinformation that is earning the DoT an unenviable reputation.

The bypass threatens to slice through Little Solsbury Hill - the same hill celebrated by Peter Gabriel - on the outskirts of Bath. It is an area of outstanding natural beauty and the Iron Age hill fort at its summit is a scheduled ancient monument. Added to this is an abundance of wildlife, badgers, hawks, flora and fauna that live, not only on the hill but also in the threatened watermeadows.

Amey Construction are the DoT contractors for the operation. They began work on March 14th and by June 10th, had completed a site compound and begun earth- moving in the surrounding watermeadows. Excavation has now also begun on the slopes of the hill itself but there is determined opposition to the road building programme; land and trees are being squatted and machinery is being occupied in efforts to thwart and delay the road scheme.

The Save Our Solsbury (SOS) campaign, also working as the Solsbury Hill Action Group (SHAG) have been working against the road scheme for four months. Growing media interest and local support for the campaign has raised the profile of this issue to a national level. Dongas and other veteran anti-roads campaigners have joined SOS at the site, as have squatting campaigners from nearby Bristol. These groups, combined with growing numbers of local residents willing to become involved in non-violent direct action (NVDA), have been squatting houses due for demolition, sitting in trees, locking themselves on to machinery and holding marches through Bath.

Tania de St Croix, one of the founder members of SOS, puts support at anything up to 150 people for direct actions and, on Sunday 7th June, 1,500 people turned out for a day of protest walks over the hill and through the construction site. Robert Key, minister responsible for the operation, has been quoted describing protesters as “rent-a-mob”, his ill-informed utterances have only served to anger residents of Britain's only World Heritage City.

“It’s a very empowering experience for people to come and get involved,” said Tania. “When local voters get involved in protests of this nature it becomes very hard for the Government to ignore. It’s one of the few things they have to listen to. The Criminal Justice Bill may well change all that.”

On May 3rd, after a very successful and enjoyable Beltane gathering held on the hill, the DoT evicted all of the squatted properties and most of the occupied land. Tree sitters were smoked out with toxic fumes from blazing tyres and, after a day that saw 42 arrests, the DoT managed to reclaim, gravel and destroy a substantial part of the watermeadows. More land at the northern end of the roadworks has been squatted and a caravan now serves as the SOS site office. A collection of benders, tents and a tepee provide living space for those permanently on site. Further up the hill another bender camp-site is surrounded by tree-houses awaiting the day when they will be occupied against the onslaught of bulldozers, cherry-pickers and security guards.

In November 1993, a leaked DoT/DoE document cited the bypass as part of the Southampton/South Wales “strategic route” and, after an expose of previously undisclosed material, it is now widely accepted as likely to form a part of the Dijon to Belfast Euroroute - one of a number of highly controversial euroroute road schemes.

Four years ago, a public inquiry into the Batheaston bypass ruled in favour of DoT plans but, in the light of the hidden euroroute agenda and prompted by a public meeting organised by SOS that attracted 500 people, Avon County Council have called for work on the road to be stopped pending a review of roads in the area.

Four years ago Jonathon Dimbleby, national broadcaster and local environmentalist, was one of those who voted in favour of the new road. Today, however, he has a different view. In an article written for the local newspaper, Bath News, Mr Dimbleby invites local residents to go and see the destruction for themselves:

“You will see the beginnings of what would be a mega-junction that Los Angeles would envy. That’s where each dual carriageway becomes a six lane monster. Yes, that’s 12 lanes in all. Twelve lanes of progress.”

Officially known as TERN (Trans European Road Network), the euroroutes intend to link the whole of Britain to the channel tunnel. Freight transport by rail and sea will become financially redundant through a series of motorways, dual carriageways and “upgradings” that, opponents say, will themselves be upgraded in the near future. At Solsbury Hill, what is now a ‘bypass’ will, in all likelihood, become a fully-fledged national motorway within a decade.

Road Alert, the direct action arm of ALARM UK (the national alliance of anti-road groups), allege that no adequate ‘non-technical summary’ of the Solsbury Hill scheme has been produced. A ‘non-technical summary’ is a report, written in layman’s terms, of environmental and sociological impact that can be easily understood by non-specialists. One such survey has been published but this was at the back of an obscure DoT report that costs £75 - hardly accessible, highly inadequate and allegedly in contravention of European Law. An official complaint has been lodged but, by the time the European Courts investigate the matter, it may well be too late to save Solsbury Hill.

Earth First! have also been active in campaigning against the destruction of Solsbury Hill. On 29th March the Oxford branch of Earth First! occupied the head office of Amey Construction. In an action that lasted several hours, Earth First!ers sat in on board meetings, disrupted proceedings and generally created as much non-violent havoc as they could. After similar actions at Leeds and Frome, Oxford Earth First! say they have a list of Amey offices around the country and are planning more actions.

The two mile stretch of dual carriageway at Bath will cost the taxpayer £75 million and the DoT estimate a 25% increase in juggernaut traffic. In Bath itself, pollution levels are already in excess of european directives and the DoT estimates an extra 600 vehicles a day in the area once the ‘bypass’ is completed. History has shown that DoT estimates for projected road usage are ridiculously conservative. A second London orbital, proposed to relieve the overcrowded M25, is one such example. Projected usage for most of Britain’s motorways was so inaccurate that massive amounts of money have been needed for repairs and upgradings long before expected.

One deadlocked activist, who preferred to remain anonymous summed up the situation in a nutshell:

“Everyone knows that the level of traffic around here is intolerable but Bath has one of the worst public transport systems I’ve ever seen. If the bypass is really just a local issue, why not invest in public transport rather than a new road?”

The DoT seem to be intent on completing work as quickly as possible, regardless of costs, before opposition to the scheme can become a national issue. Twyford Down was in danger of entering the national consciousness just before it was secured for the DoT. More recently, the M11 in Wanstead has courted more media and public support than the Government can comfortably deal with. This, many would argue, is one of the main reasons for the introduction of clauses dealing with aggravated trespass in the Criminal Justice Bill.

In the CJB, actions which seek to disrupt ‘lawful activities’ (fox-hunting, road-building, nuclear weapons operations etc.) will become a crime. Local residents of Bath could become criminals for protesting on DoT compulsory-purchased land.

If all of this sounds as though the battle is lost, think again. Much of the clearance work has not started and most of the construction work has yet to begin. A proposed bridge across the Avon has not yet received planning permission (from Avon County Council). Amey and the DoT are not in possession of all the land they intend to destroy; some is still held by locals who refuse to accept compulsory purchase orders. There are still many fights to be fought and the protesters claim they have, so far, delayed the scheme by one month (it has only been operational for three). While large scale actions generally take place on Saturdays (when local residents have time to join in), nearly every day sees an action or two; a dozen activists clambering onto diggers and bulldozers, two or three climbing on to drilling rigs. Whenever actions happen, work stops. Security guards are called for and it can take anything from 30 minutes to several hours to remove the protesters and restart that particular operation. As far as the campaigners are concerned, it is a battle against time and every minute delayed is an extra minute for the issue to be raised and word to be spread.

As for the Criminal Justice Bill, Tania is adamant that it will not stop activists from highlighting the activities of the DoT:

“It (the CJB) won’t stop me. When people have decided that enough is enough they will do what their conscience dictates, despite the consequences. It may put a lot of local citizens off but the level of support is now such that we even have people who live high up on the opposite side of the valley ringing us up each morning to tell us where the Amey construction teams are.

“Local people who came to see what was going on for themselves and who have become involved have started to see things in a new light. Previously held conceptions that natural justice will prevail are tending to get lost and people are beginning to see our system of democracy for what it is.”

The future of Solsbury Hill is in the balance but Tania is optimistic:

“This campaign represents the best NVDA opportunity yet to stop these roads. We’ve had so much local support and now there are some strong anti-roads groups around Bath. It’s more than a local issue, it’s a national concern.”

Tania then made an appeal for more people to come down on main action days and get involved. She doesn't expect people to hurl themselves at machinery or lie in front of bulldozers, just to come down and see what’s happening for themselves.

Jonathon Dimbleby, in his article in Bath News concludes:

“If you care about the nation that your children and your grandchildren will one day inherit, then why not come and see for yourself? As the man said, Seeing is Believing.”

Related Articles
For a menu of many other Squall articles about the Anti-Roads Movement, including protest camps, Reclaim The Streets and more click here