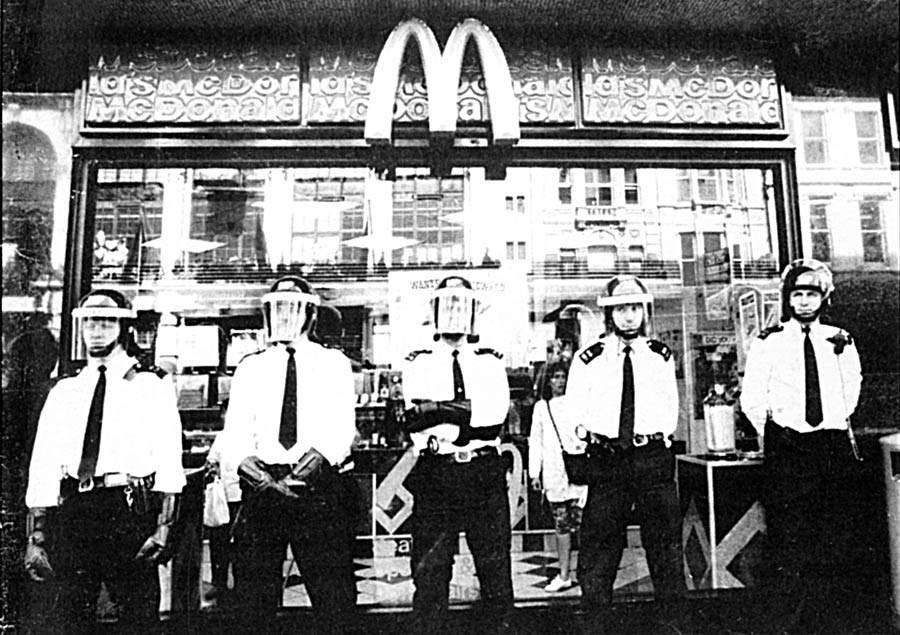 What happens when a trans-national company creates a religion to sell an unhealthy product. What happens when two environmental campaigners have the opportunity to cross-examine top corporate executives on their techniques of market manipulation? Jim Carey reviews the dam-burst of evidence spilling from the mouth of a cornered corporation.

"It is our objective to dominate the communications area.... we are competing for a share of the customer's mind," said McDonald’s UK Marketing Services Manager in High Court room 35.

Indeed, a recent survey suggests that the $1.4 billion spent each year on McDonald’s marketing is achieving its objective. After only forty years of competing for the "customer’s mind", the golden arches of the McDonald’s Corporation is now credited as a more globally recognised symbol than the Christian cross.

In the world of corporate business this is a major success. McDonald’s rapid and extensive domination of the global junk-food market is an advertising coup envied throughout the industry, a corporate conquest commanding an annual global turnover of $26 billion. In the UK alone, £41 million is spent on advertising, with one new McDonald’s burger bar opening every week.

It is criticism of the techniques used to ensure this conquest that has become the subject of the longest libel trial in British legal history. The biggest public grilling ever to draw blood from the manicured reputation of the McDonald’s Corporation recommenced in the High Court on September 25th.

"Their influence is out of all proportion," says Dave Morris, one of the two defendants accused of libelling the Corporation. "After all what are they? No different to a hot dog stand outside a football ground on a match day. They just add huge amounts of hype with their ketchup."

Meanwhile, in High Court room 35, one of Britain’s top libel lawyers, Richard Rampton QC, has been hired at the cost of £2,000 a day to nail two unwaged corporate critics - an ex-postman and a part-time gardener. But things are not quite going according to the Corporation’s plan.

The golden arches of McDonald’s Corporation is now credited as a more globally recognised symbol than the Christian cross.

Throughout the years, a long list of organisations daring to criticise McDonald’s has included newspapers, TV companies, environmental campaigns and trade unions. Every one of these organisations has been threatened with the wrath of the Corporation’s legal department, and every one has consequently backed down, apologised and agreed to tread carefully in future. Any freelance journalist commissioned to write about McDonald’s is forewarned by editors to avoid any remotely libellous controversy. In the world of corporate advertising, this is considered a job well done; the “customer’s mind” is captured, the critical tongues are tied, the reputation kept shiny and the market sewn up.

But with McDonald’s huge advertising campaign as the ammunition behind its global conquests, public embarrassment is both its major enemy and the Achilles’ heel now permanently in the sights of the two people McDonald’s are suing. After a forty year history of relentless marketing, the tenacity of two individuals and their support campaign is providing the Corporation with the greatest threat yet to its carefully cultivated image.

National and international media have referred to the case as a modem day re-enactment of the David and Goliath story. The biblical comparisons are not exaggerated either. For the usurping of the Christian cross by the golden arches as a recognisable global symbol has been achieved via a mechanism used throughout history to establish religious predominance. The McDonald’s marketing managers appearing in the High Court witness box have used words like “persuasion”, “loyalty” and “brand awareness” to describe their marketing strategy. As every advertising executive or copywriter will tell you, these are common terms and certainly not exclusive to McDonald’s. However, the extent and success to which McDonald’s have promoted their type of food, which in the light of current evidence has serious implications for human health, presents a major cause for concern over the galloping lack of ethics involved in modem marketing.

David Green, McDonald’s Senior Vice President of Marketing, revealed to the court that McDonald’s internal code for their advertisements includes the aim to induce “a warm empathy towards the commercial”.

To some extent, Planet Earth is already governed by trans-national corporations. In future this control will become more established as traditional national boundaries fade in economic significance. As such, anyone interested in the future of human politics should be interested in the techniques of trans-national corporate domination. The McLibel trial is an early and accessible window on that world.

The stance taken by the McLibel defendants is undoubtedly the stuff of modern myth. It is a battle for those “customers’ minds”, rounded up into the burger church via the use of psychologically targeted advertising. For it is fair to say that “the McDonald’s experience”, as their marketing executives refer to it, is a cult. The fact that the two defendants in the trial are the heretics of the story is an exposure, for all those with eyes and ears, of the gods to which modem society offers its worship.