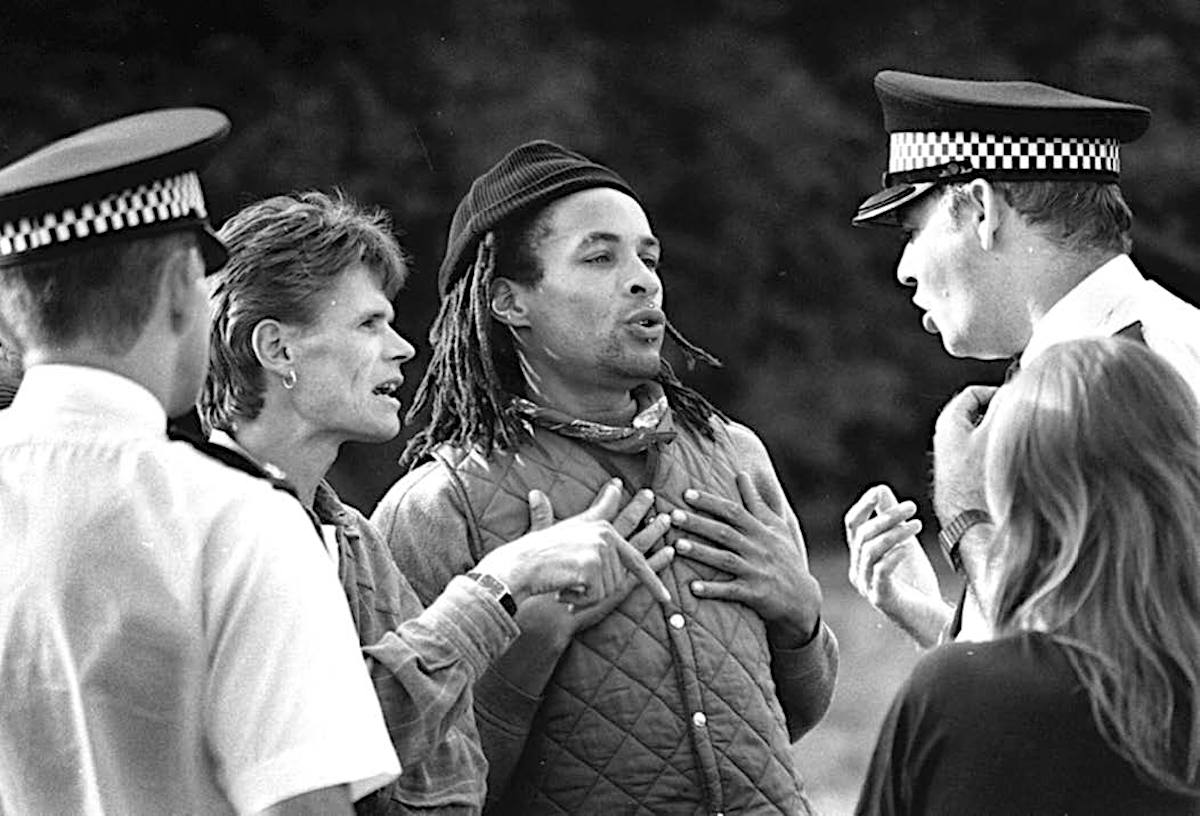 Biggs and Glenn in a familiar role. Photo: Nick Cobbing

Wh’appen With The Exodus Collective?

A judge describing their work as “splendid”, an invite to discuss their alternative to ‘Misspent Youth’ and attempts to close the pub managed by the mother of collective members. All in all an eventful few months in Luton. Squall comes with the update. Photography by Nick Cobbing.

The Department of Transport had originally compulsorily purchased the premises for a road- expansion scheme which had never materialised. The Collective then squatted the derelict farm in 1993, rebuilding it and stocking it with farm animals. They obtained a rent- paying licence to remain on the property and, pending the construction of public toilets, aspired to open the farm to the local community. Last year however, the DoT sent notice for Exodus to vacate the premises, announcing their intention to sell the farm to a winning bidder. After having the property valued, the Collective began seeking loans from organisations like the Ecology Building Society. As prospective usage of the property is limited by agricultural planning restriction, the DoT said it was not expecting much interest and advised Exodus to put in a bid 10 per cent lower than their valuation. The Collective consequently registered a bid of £54,000. They were then told by the DoT that higher bids had been entered, and that the new guide price for the property was £63,000. Exodus upped their bid to £70,000 to be sure.

The next they heard about the issue was a court summons for possession.

The DoT have refused to say who the other bidders are, although, despite their statement to the contrary, they are not obliged to accept the highest bid.

Exodus subsequently lost the court possession proceedings, primarily because they had not sought legal advice on their rights to remain.

Lyle, one of the youngest members of the collective with mum, Ruth. Photo: Nick Cobbing

Exodus appealed against the possession order at Luton County Court arguing their expectations of property purchase had led them not to seek legal advice about their existing tenancy. And yet there were strong legal arguments. However, the judge dismissed their appeal.

For their last appeal opportunity at the High Court on March 13th this year, the Collective were legally represented by one of the most socially committed firms of solicitor’s in the UK, McGrath & Co from Birmingham. Their London-based barrister was David Watkinson, a legal professional with a long history of court battles on behalf of squatters and Travellers.

In one of the most jovial court cases Squall has ever witnessed the judges presiding over the case made it clear from the start which way they were going to rule. After describing the work the Collective had done on the farm as “splendid”, they passed judgement that Exodus should have the right to put their full legal arguments before a court. Following the verdict, the High Court echoed with a highly unusual round of applause from a gallery packed with members of the Collective and assorted empathisers. This means they now have a stay of execution until a newly arranged court case on an as yet undetermined date.

Both Exodus and their legal representatives believe they have a reasonable chance of success in establishing rights to remain on the property under the Landlord and Tenants Act 1954 and Agricultural Tenancy stipulations.

An imminent round table conference on ‘Misspent Youth’ covering unemployment and crime, will involve police, local councillors and social workers. Exodus have been invited to contribute to the conference and will discuss their proposal to open a community centre in Luton. The centre, to be known as the Arc, aims to provide cultural activities, craft markets, food and dance events for Luton’s youth. Everything will be low cost and funded by a £5 levy on each rave. The proposal has been strategically blocked at various stages (see previous Squalls) but now perhaps there is light at the end of the Caesar’s Palace tunnel.

Heat From A Different Angle

For the last three years, the Globe public house in Dunstable has been managed by Betty Jenkins, the mother of Exodus spokesperson Glenn, Exodus DJ Hazad and fellow founding member Elaine. Over the last year, bizarre moves have been made to try and force the pub to close.

When a local resident began making noise complaints against the pub, the police and local council asked him to keep a log of all the misdemeanours he observed from his house across the road. Mr Anderson, who at one time had draped a confederate flag across the entire front of his house, claimed that the Globe was very noisy and that Mrs Jenkins had both chased and set her dog on him. Amongst the multitude of allegations, Anderson also complained about seeing fights in the street and of women urinating in the street. The brewery which owns the Globe public house then received a letter of complaint from the housing association responsible for managing properties in the surrounding area, with Anderson’s complaints as their sole reason for concern. In order to placate this sole complainant, Mrs Jenkins spent £3,000 putting in double glazing and bricking up one door way to cut down any noise escaping from the pub. However, this failed to stem Mr Anderson’s barrage of objections.

Meanwhile Mrs Jenkins held coffee mornings for local residents to gauge whether Anderson’s objections were shared by other locals. Far from being in agreement with Mr Anderson, the other residents signed a petition in support of Mrs Jenkins. Of the ten people people living in a nearby close, only Mr Anderson failed to sign the petition. Remarkably, in response only to Mr Anderson’s compaint, South Bedfordshire District Council Environmental Health Officers issued a noise abatement order against the pub. However, Betty Jenkins successfully appealed the order and it was withdrawn. In June 1996, South Beds District Council wrote to Mr Anderson telling him there was no point in keeping a log of alleged misdemeanours anymore.

The following weekend six police detectives then moved into a house across the road in order to carry out weekend surveillance observations on the Globe. In sharp contrast to Mr Anderson’s long lists of sometimes bizarre allegations, the sum total of their surveillance log - now disclosed to Betty Jenkins - cited a few incidences of men urinating against a wall in an alleyway nearby, and some men walking out of the pub at 11.40pm with beer. 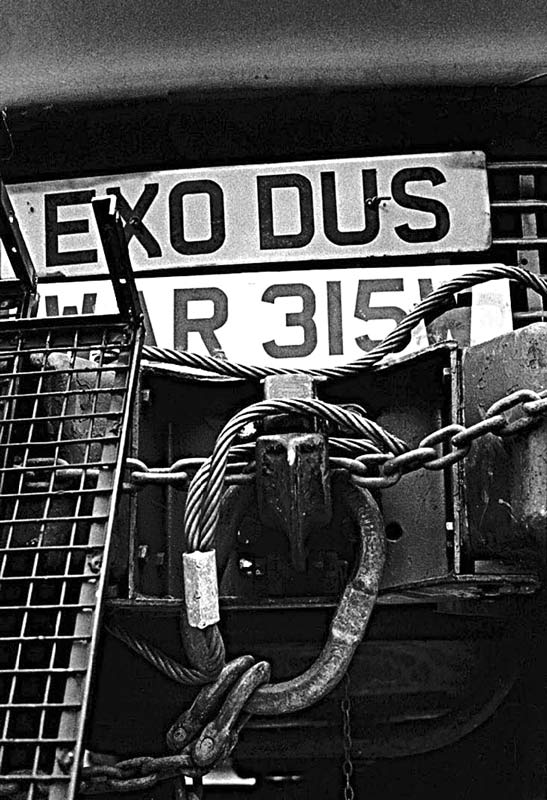 One evening in September 1996 Inspector Nicholas Banfield from Dunstable Police, walked into the pub, looked around and walked out again without saying anything. The next morning he came back and warned Betty that it was an offence to have drunk people at the bar.

On October 18th, Inspector Banfield returned with another policeman, and according to witnesses demanded, “Where’s Jenkins?” (referring to Betty). He then attempted to caution Mrs Jenkins for the two people he said he had seen walking down the road with bottles of beer at 11.30pm. Betty Jenkins refused to accept the caution claiming the incident, if it happened at all, was unconnected with her pub because her doors had been locked. Banfield then pushed Richard Jenkins against the bar and, when other people on the premises raised objection, left saying he felt intimidated and telling Mrs Jenkins to come and see him the next day. The next morning Mrs Jenkins’ telephoned Superintendent Brian Minihane, divisional commander of Dunstable Police Station and registered her complaint over Inspector Banfield’s “obnoxious attitude” and his assault on her son.

On November 15th, Inspector Banfield reappeared with six other policemen and claimed that someone was still drinking up at 1 1.23pm. Two probation officers, also finishing their drinks in the pub, have testified that they saw police punch one customer and push others off their seats. When one of the probation officers protested to the police, she was told to shut up or she would be arrested. Within minutes the number of police had swollen to over twenty, with officers drawn from three divisions. The speed with which such a number of police officers could be summoned suggested they had all been on standby nearby.

Such a response for an alleged licensing check is extraordinary, and further suggests a deliberate proactive operation directed against Betty Jenkins’ licence. Indeed, two days after this last visit, police served a ‘revocation of licence’ notice on Betty Jenkins accusing her of being unfit to run a pub despite the fact that she had been successfully doing so for the last eight years. A licensing court case is pending.

Meanwhile, Richard Jenkins and one other Globe regular have now served a summons on Inspector Banfield for assault. This case is also pending. Police attempts to prosecute one of the punters in the pub for assaulting an officer was thrown out of court on May 1 st. The judge ruled that police had gone “gone beyond the execution of their duty”.

This summer keep your eye on Channel Four for the most up to date and authoritative media investigation yet. Spectacle Productions’ brand new documentary investigates the multi-strategic attempts used by vested interest to destroy the Collective. The programme is a cutting-edge follow-up to their inspirational Exodus - Movement of Jah People also broadcast on Channel Four last year.