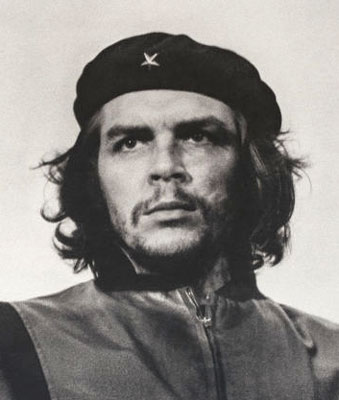 Vodka Ad Not In Socialist Spirit

It was a flippant British advert for vodka which finally provoked 72 year-old Alberto Diaz Gutierrez, aka Korda, to claim copyright for one of the most famous photographs in world history. In September this year, Alberto Gutierrez accepted "substantial" payments from photo-agency, Rex Features and the advertising agency, Lowe Lintas, for the misappropriation of Che Guevara's image for a spicy vodka advert in the UK.

Korda's photograph of a strident and determined Che Guevara, entitled 'Guerillero Heroico', was taken on March 5 1960 at a memorial for 100 Belgian seaman killed when anti-Cuban forces, back by the US, attacked their arms-carrying shipment. At the memorial service, also attended by Jean Paul Sartre and Simone de Beauvoir, Guevara stepped forward on the platform for a brief moment and, seeing the look on his face, Korda aimed his Leica camera. After falling into the hands of Italian publisher Giancomo Fetrinelli in 1967, Korda's photograph was mass reproduced on posters, badges, T-shirts and sold all over the world. During that time several people, including Fetrinelli, made a stack of money from the image but Alberto Korda was neither acknowledged as author nor given any royalty payments.

Although it was common knowledge that, as a photographer for a Cuban newspaper, Korda had taken the photograph, Korda himself never pressed for royalties although he acknowledged in London recently that "I have always considered it a mark of disrespect for the picture to be used without my permission and without me being credited as the author.

However, according to his submissions to the High Court, Korda accused the British advertising company, Lowe Lintas, of trivialising Guevara's image by overlaying it with a hammer and sickle motif where the hammer had been replaced by a chilli pepper.

Korda said: "I was offended by the use of the image. To use the image of Che Guevara to sell vodka is a slur on his name and memory." Initially Lowe Lintas and Rex Features contested Korda's claim of copyright infringement, but then agreed an out of court settlement. The settlement was ratified by the High Court and Korda was declared to be the copyright owner of the image. In keeping with Korda's socialist principles, the photographer has donated the money he received from the settlement to child care projects in his native Cuba.